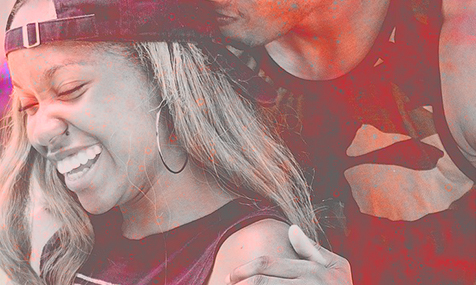 A man in the sticky note aisle of the office supply store makes a witty remark. He earns a chuckle from me before he moves on. After completing my purchase, I step onto the sidewalk. That's when Mr. Sticky Notes appears out of nowhere and asks me out.

My first instinct is to turn him down, but the invisible chorus of dating gurus in my head scolds, 'You never know! He could be the love of your life!'

Sure popular dating advice warns us that turning down a man, any man is a big mistake. But have you ever dated down, and it turned out to be a good thing? Or did you give somebody you had zero interest in a chance? And let me guess, it ended up just feeling creepy, amirite?

Some people don't do it for you, and others push your attraction buttons. Those love buttons get triggered when your horoscope lines up with the cosmos. That's when you'll come face to face with your soulmate.

So you could say trying to manufacture attraction requires moving heaven and earth. Wouldn't it be much more effortless to attune yourself to the cosmic moment when your soulmate will simply walk into your life?

But if you're still unsure -- if it's easy for you to wonder if you should accept dates even when you're not feeling it -- you can use the stars to help you double-check your instincts.

How Horoscopes + Timing Reveal Your Soulmate

Astrology love timing shows you clearly who's a time-waster or if they have a chance to be your Soulmate.

The first time you connect with someone, sets up the pathway of your whole relationship. If the timing is great when you meet, you two have a chance. But watch out because few couples make it together successfully if the cosmic timing is off when they meet.

When Audrey Fell For Kevin

Audrey and Kevin were introduced by friends at a huge weekend music festival. They stayed up all night talking and exploring the night scene at the festival. From the moment they met, they were drawn to each other.

Boom! It's undeniable when you make a strong connection with someone.

Even though they lived in different countries, they had to keep seeing each other. So they started a long-distance relationship and frequently traveled between Audrey's home in Helsinki and Kevin's in London to see each other.

The couples' cosmic love timing on their AstroLoveTimer reports showed they were both in green love cycles on the day they met. Green indicates when the timing is right to start a new relationship. Wondering what an AstroLoveTimer report is? It's a simple-to-read color-coded report that shows your luckiest times to meet somebody new. You'd be surprised how often these reports match the attraction and lack of interest you feel for your partners.

You Can Sense When Somebody Is A Good Fit

The 'experts' will insist that turning down men is dangerous. That you may miss your chance with somebody great. But I believe you are an excellent judge of character.

You know you have wild passionate feelings for some people, and others just don't do it for you.

And saying 'yes' when you're not feeling it means ignoring your excellent judge of character.

But guess what? Saying yes reinforces doubting yourself.

The thing is that 9 times out of 10, you're not feeling it because the astrology love timing is not in a good place. Honoring your feelings by saying no to dates reinforces your ability to resonate with the guidance the stars are gifting you.

That's what I did. When Mr. Sticky Notes asked me out of nowhere, I gave him the classic, 'sorry I've got a boyfriend' excuse. He reacted by narrowing his eyes and sarcastically scoffing out loud, "Yeah, right."

Which was fair enough but also reassured me that my instincts were correct. No, I didn't get a chance to look at his love timing astrology, but Mr. Sticky Notes' response was rude and proved he was undateable.

When You Want It To Be True Love (But It Isn't)

Cara met Allison when their friend groups started to merge on the dance floor at The Goodfoot.

Cara had led retreats and workshops for over a dozen years. But she found it challenging to find people interested in spirituality in the LGBTQ community. Even in a town like Portland that has a reputation for being very progressive.

Allison impressed Cara when she shared that she had lived in Indonesia at a Buddhist retreat center for a couple of years.

But when Cara came to me and asked me to peek at their astrology love timing, it was clear that this relationship might be a challenge for Cara. When I asked her how she felt about Allison, the truth came out.

That first night on the dance floor, Cara noticed a lot of intensity from Allison. Cara was attracted to Allison, too. But she felt herself holding back — she just wasn't sure why.

Cara told me she had only been dating Allison for a few weeks. But she was already signaling that she saw a future with Cara. It was easy to see Allison's intensity on her AstroLoveTimer report. Cara's lukewarm feelings were easy to spot too.

The next time I saw Cara, she had already broken things off with Allison. She said it was difficult but that it felt like the right decision. Her love timing horoscope proved she was right.

We've all experienced partners who were all about creating a life with us, but we couldn't get into it. Other couples have instant synergy and make it work even when there are obstacles between them, like Kevin in Audrey who live in different countries.

The cosmos either create a spark, or the flame between two people refuses to light.

This astrology timing can confirm if someone you have zero interest in is The One or if they're genuinely not for you. And yet romance novels are full of strangers in the sticky note aisle whom the heroine has no interest in but turns out to be her office supply knight in shining armor. If these stories make you doubt yourself use the cosmos to guide you back to believing in your inner attraction compass. 99.999% of the time, it will lead you to The One.